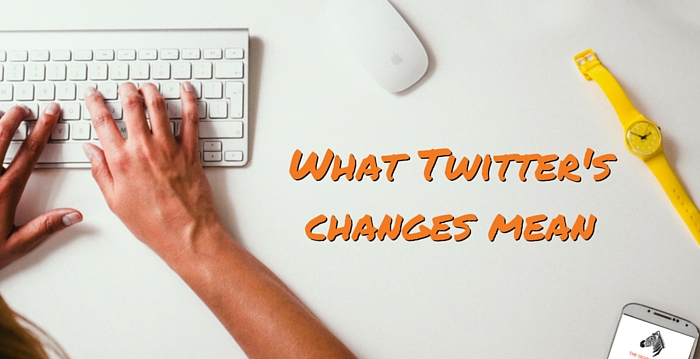 Today (24 May 2016) Twitter announced changes to some of its functionality.  In this article, Mark Wilson looks at the changes and what they mean.

Like any cutting-edge technology business, Twitter needs to demonstrate that it is continually improving its service in order to retain its current users as well as to win new business.  And, like any good business, it appears that Twitter is listening to its customers.  Those customers have two slightly contradictory messages.  Many users want to be able to increase – slightly – the amount of content they can present within a single tweet.  But users don’t want a significantly larger character limit.  Twitter is not, after all, Facebook.  So the message from customers is clear: “we demand more, just not too much more!”

So Twitter has now provided notice of some changes to the way in which the service works, which will marginally increase the amount of text a user can squeeze into each tweet.  While the DM (direct message) character limit was increased to 10,000 characters last year, the 140-character limit still exists for public tweets.  But now, that 140 limit is no longer eaten into by @names, photos, GIFs, videos and the increasingly-popular polls.

There are four key changes announced now.  And Twitter promises that they have further plans which will “make existing uses easier” and “enable new ones”.   The four changes trailed now are:

When you write a reply to a tweet, the first few characters are taken up by the @name of the tweet to which you are replying.  This @name will no longer count towards the 140 limit.  This is great for businesses replying to customers’ queries, because they will no longer need to abbreviate so much or so often.  And it’s great for soliciting responses from followers, for exactly the same reasons.  Our Twitter handle here at The Digital Zebra is @TheDigitalZebra – that uses up 17 characters at the start of any reply to us, or 13% of what could otherwise be valuable content.

Tweets can contain media, such as videos, GIFs, photos or polls.  But, until now, each of these “attachments” requires an obfuscated line of text, using up a number of characters in the tweet.  This means you lose another few characters of your 140 limit.  The changes announced today mean that you will no longer have this restriction: the characters previously required for the attachment will no longer count towards your 140-charater allowance.   This should help to prevent the regular dichotomy users have: “should I reduce what I write or drop the images?”

This strange looking anomaly often causes confusion to inexperienced Twitter users.  Twitter works by presenting, in your timeline, the tweets sent by the accounts you follow.  It also shows the tweets sent by one follower to another as long as you follow them both. So, if you send a tweet to someone, using their @name at the start of the tweet in the normal way, your followers will see that tweet in their timelines, as long as they are following both you and the account you are tweeting.

Sometimes, you might want to make sure all your followers see the tweet you are sending someone.  The simplest way to do that is to start the tweet not just with the recipient’s @name, but by placing a dot ahead of the @name.

The change announced today by Twitter does away with this anomaly.  If you send a tweet to any account, all your followers will see it in their timelines, whether they follow the recipient or not.

This is an odd one, to say the least.  It’s possible to retweet any tweet, so that your followers see that tweet in their timeline.  If you see that someone has tweeted something interesting, why not share it with your followers?  You can do so with a simple click on the Retweet button.  Quote Tweet is similar, except that it allows you to add some “commentary” about the tweet.  A great way for brands to share third parties’ information.  Until now it has not been possible to retweet or quote tweet your own tweets.  Why would you?  You’ve tweeted it once, what’s the point in tweeting exactly the same thing to the same followers?

Twitter has always done a good job listening to its user base and providing functionality that suits.  It sometimes oversteps and either hints at or delivers functionality that does not go down so well.  Cases included the much-trailed 10k character limit that was quietly axed when users objected en masse; and the widely-hated “Show me the best Tweets first” functionality rolled out last year and hastily followed by instructions on how users can switch it off.

This time Twitter is rolling out four new piece of functionality – although not yet revealing publicly when they will go live. My prediction is that they have got two of them absolutely right, first time: replies and media.  The other two – .@name and retweet and quote tweet yourself – may take some getting used to.  We’ll wait to see whether and how well they’re used and what for.