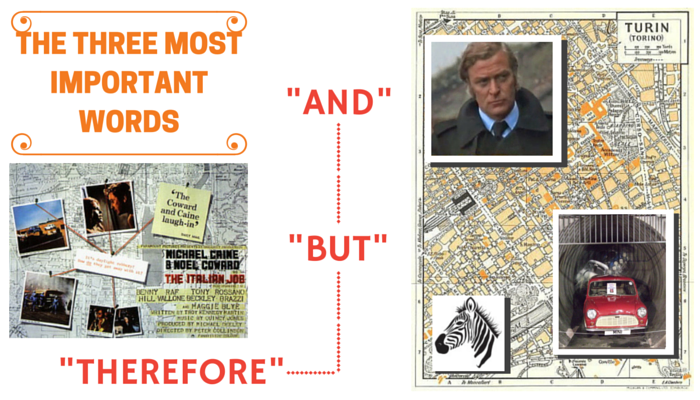 Or, “How Charlie Croker Taught Me The Three Most Important Words in story-telling”.

Creating compelling marketing copy requires more than simply telling your audience about your product or service.  You need to construct, finesse and tell a story.  This blog, written by our founder, Mark Wilson, explains how Charlie Croker helps confirm which three words are the most important to bear in mind when writing the story.

By telling a story you are interfacing directly with base, pre-historic instincts, hard-wired into the human brain.  The human mind searches for stories, assimilating information from them and comparing the roles and scenarios of a story into the actions that human will take if ever faced with similar circumstances.

How does this work? When you hear a story, you automatically compare the scenarios in the story with your own memories, stored with the brain’s hippocampus.  The hippocampus plays important roles in spatial awareness and in consolidating short-term and long-term memories and in spatial awareness.  So, every time you hear a story, it’s the hippocampus, buried deep in the temporal lobe of the brain, which fires into action.  It compares the narrative of the story with your vast stores of memories, working out similarities between the events you are hearing and the actions you would take in the same scenarios.  You hear one thing and you literally ask yourself the question: “how would I react in that circumstance?

The brain of your audience members will be comparing – hundreds or thousands of times a second – the scenarios it hears in the in-coming story, with how that individual has reacted to similar stories in the past.  So the trick is for the story you tell to follow a specific formula.  This formula of the story is well-known, well-established and we – as humans – react to it over and over again, every single day.

So, what is the formula to ensure the story is created and delivered in precisely the right format to ensure the audience’s minds assimilate – and react to – the information in the ideal way?  There are several versions and they vary in complexity.  Joseph Campbell sets out a sequence of 17 actions in the “Hero’s Journey”; Blake Snyder claims there are 15 “beats” to a story; and Park Howell deploys a 10-step “story cycle”.  But, the lowest common denominator can be boiled down to just three steps.

These three steps – set-up, conflict, resolution – can be used to frame every story, from a Hollywood blockbuster to a brand strategy, or from a thirty-second TV commercial to a six-second Vine.

But how do you know you have got it right?

You might have created a story which, on review, doesn’t appear to tick all the right boxes.  Your narrative might have one step, followed by another, followed by another. Sequential actions, but no conflict and no resolution.
In this case, you need a tool to change a dull, step-by-step narrative into a powerful, engaging story that is based on “set-up, conflict, resolution”.  That tool is known as “ABT”, which stands for “And, But, Therefore”.

A set-up can be described by a series of descriptions, joined with the conjunction “and”.
Charlie Croker left prison AND was asked to plan a robbery AND gathered a team to complete the job AND practised blowing up van doors AND… etc

The conflict is introduced by adding the conjunction “but”.

The resolution is described by adding the conjunction “therefore”.

Charlie Croker left prison and was asked to plan a robbery and gathered a team to complete the job and practised blowing up van doors but his plans were thrown adrift when Italian gangsters discovered the plot THEREFORE he had to change plans and use an alternative escape to Switzerland.

So, thanks to Charlie Croker – or, in fact virtually any character in any Hollywood movie, any TV drama, any TV commercial, any well-constructed Vine or Snapchat video – we now know the three words which will help construct a compelling narrative: And, But and Therefore.  Once you have confirmed that the story you are looking to get across has the three steps – set-up, conflict, resolution – you can be sure that the story will enable the hippocampus of your audience’s brains to work with you, enhancing the story and ensuring you take your audience on the journey with you.

So, next time you want to get a message across – to customers, prospects, investors, competitors – start by thinking about “and, but, therefore” and put your customer at the centre of your story.  That way, you will make sure you create a story, with a set-up, a conflict and a resolution.

Why not let us help you create compelling, engaging stories to get your message across?  We can help you build the stories, promote them across your social media platforms and maximise the results they drive for your business.  Email us now – info@thedigitalzebra.com.